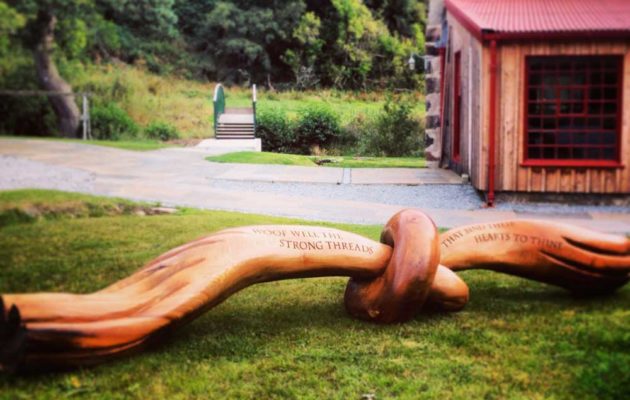 This sculpture is now situated at the entrance to Knockando wool mill. It is about ten feet long and was carved from a single elm log. It is loosely based on the idea of a length of knotted yarn. 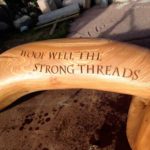 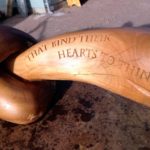 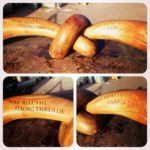 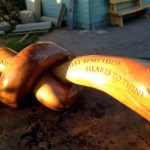 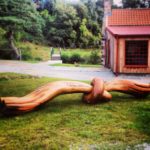 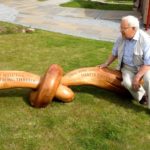 The Knockando Woolmill is close to my home in northeast Scotland and has been manufacturing woollen textiles continuously since 1784. It is recognised as a unique part of Scotland’s manufacturing heritage and was awarded significant funding for its restoration. The restoration of the old mill and some ancient looms was recently completed and the mill has been up and running and producing beautiful woolen ware once more.

As a “capping-off” the Knockando Trust asked BBC TV’s Beechgrove Garden to design and landscape the outdoor space. The gardens were completed two weeks ago and the final plantings were filmed for an upcoming episode of Beechgrove.

Hand-carved into the face is the following lettering – “Woof well the strong threads that bind their hearts to thine”. They are the last two lines form a 19th Century poem by Alice McDonnell

And warp well the long threads,
The bright threads, the strong threads;
Woof well the cross threads,
To make the colours shine.”
She wove in red for every deed,
Of valour done for Scotia’s need:
She wove in green, the laurel’s sheen,
In memory of her glorious dead.

She spake of Alma’s steep incline,
The desert march, the “thin red line,”
Of how it fired the blood and stirred the heart,
Where’er a bairn of hers took part.
“‘Tis for the gallant lads,” she said,
“Who wear the kilt and tartan plaid:
‘Tis for the winsome lasses too,
Just like my dainty bells of blue.

“Sing high,” she said, “sing low,” she said,
Wild tempests to the sea,
The wailing of the pibroch’s note,
That bade farewell to me.
And wae fa’ the red deer,
The swift deer, the strong deer,
Wae fa’ the cursed deer,
That take the place o’ men.”

Where’er a noble deed is wrought,
Where’er the brightest realms of thought,
The artists’ skill, the martial thrill,
Be sure to Scotia’s land is wed.
She casts the glamour of her name,
O’er Britain’s throne and statesman’s fame;
From distant lands ‘neath foreign names,
Some brilliant son his birthright claims.

For ah! – she has reared them amid tempests,
And cradled them in snow,
To give the Scottish arms their strength,
Their hearts a kindly glow.
So weave well the bright threads,
The red threads, the green threads.
Woof well the strong threads
That bind their hearts to thine.